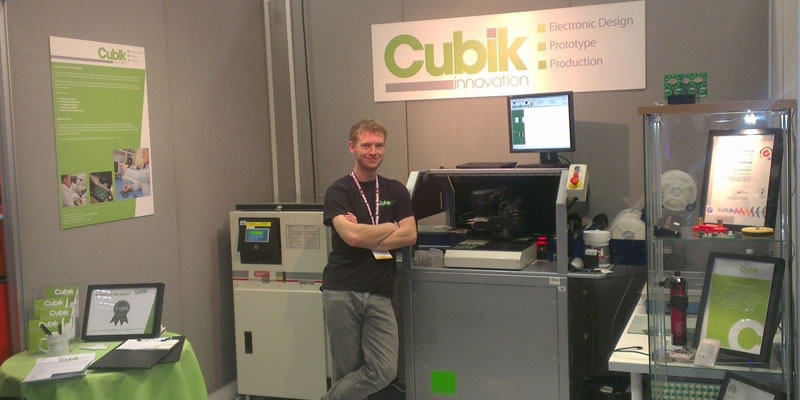 Revolutionising prosthetics manufacture with the help of Cubik Innovation

Back in 2013, Cubik journeyed over to our friends at the University of the West of England to attend Venturefest South West, a wonderful occasion for technology start-ups, entrepreneurs and inventors to showcase their innovations, encouraging business growth and collaboration. Armed with our manufacturing equipment and a few of our very own creations, Cubik hitched up a stand hoping to expand the ever growing network of talented friends and collaborators, we’ve been fortunate enough to build within the South-West technology hub. It was here, where Cubik first met Joel Gibbard of Open Bionics.

Joel had an extremely developed idea and a venture which was already well and truly underway. He had pioneered a revolutionary, world first; building the prototype of a prosthetic arm with a robotic hand, manufactured almost entirely using 3D printing and scanning. Not only was the product completely unprecedented in terms of technology, the Open Hand project was for the most part financed via Indie Go-Go crowd-funding and used open source information to allow for key collaboration and to ensure a reasonable cost when the finished product would eventually go to market. The team at Cubik could not have been more excited by the prospect of assisting on such a project, which had new technology and a profound mission to make a difference at the forefront of its objective and awarded Joel with a voucher worth a neat £1000 to use at Cubik for design consultation and PCB manufacture.

Shortly after Venturefest, Cubik HQ were ready to set to work on the project and Joel arrived prepared with stacks of electronic designs and layouts ready for Giles Sanders, our in-house PCB layout extraordinaire and Managing director Paul Mullen to unpack and examine.  After hours of planning and deliberating around the Cubik meeting table, two design reviews and a few pots of coffee we were ready to manufacture. Joel was impressed with the design and the resulting PCBs, adding- “Without Cubik’s advice we would never have had a design anywhere near the quality it is, the experts at Cubik gave us a really clear idea of our electronic hardware options and their design consultation enabled us to create reliable and high quality PCBs”.

Everyone involved was delighted to play their part in the project, Giles Sanders remarking that “being involved in a project that is so ground breaking, with the potential to change the lives of hundreds of people was an honour and a privilege” adding that “Joel’s creation and design was inspiring”. 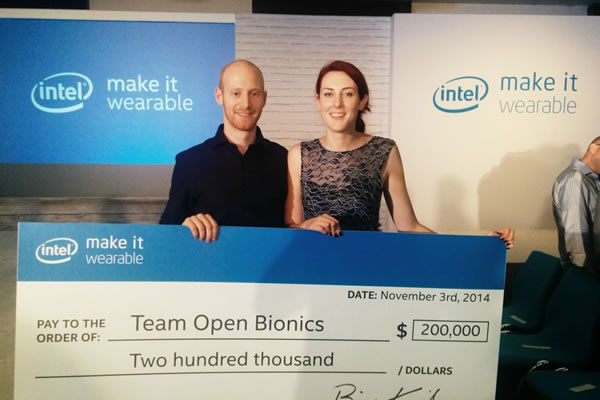 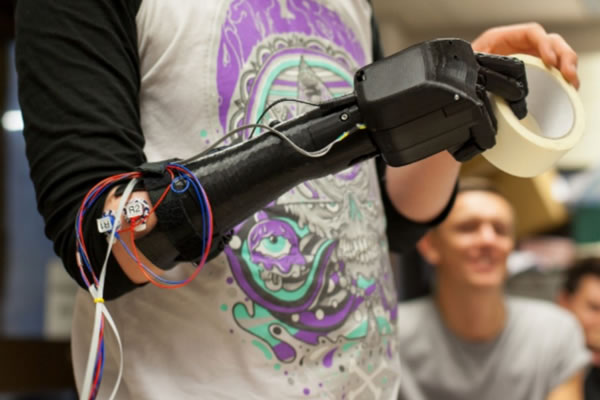 A few months on and Joel and the Open Hand project team were ready to undertake their first physical test which took place at the Bristol Robotics Laboratory earlier this week. Daniel Melville, 23 who was born without a right hand, was the first person to be fitted with the robotic hand prosthetic after contacting Joel immediately upon viewing the successful crowd funding campaign online.

Daniel was absolutely sold on the idea of Robot prosthetics and said that from an early age he’d been attempting to park the less functional, cosmetic prosthetic and wished he’d had a “cool” robot hand, commenting- “It would have been amazing when I was younger, I would have loved a 3D printed Power Ranger hand, it would have made me feel a lot better about my difference”.

The testing took on a fast pace, and within twenty minutes Daniel’s arm had been scanned with a 3D sensor creating a mesh, and then a 3D printer was used to create the hand. The socket which took forty hours to print fitted perfectly first time. Olly Mcbride, a student of Robotics at The University of the West of England, who has been helping Joel with programming, affirmed Open Bionics’ success saying- “The best part was seeing the excitement on Dan’s face, as he went round trying to pick up everything he could”, Joel adding the whole process was “heart-warming”.

Joel and his team were delighted with the results but have vowed they still aim to create the perfect solution, targeting the end product to be even more “light-weight, low-cost and creative” and on the prosthetic market by the end of 2015. Open Bionics plan to stick to their original mission and open source all information on completion of their product, making it open to further developments.

Autumn heralded even more success for Open Bionics claiming the runners up position in the Intel’s Make it Wearable competition, winning $200,000 to continue developing bionic hands. Joel and his teammate, Sammy Payne (as pictured) spent weeks in California consulting with UC Berkeley and top Intel Business mentors. Giving his reaction to receiving the prize, Joel said “We totally believe this money will help to revolutionise the prosthetics industry with the use of 3D scanning and 3D printing technology”.

Cubik Innovation were honoured to be able to play our small but vital part in the process and continue to be inspired by the Open Bionics team who are completely focused and impassioned towards their goal of delivering innovative, low cost technology as well as revolutionising the lives of amputees and differently abled people.

Joel congratulated the Cubik team, going on to say- “Working with Cubik was invaluable to the initial successes we’ve had as they assisted us in creating our first run of electronics control boards for our robotic hand prototype”.

If you have a design in its early stages, an established idea or an existing project which needs mapping in either the electronic design or production phases, please contact us to organise a telephone or face to face consultation, we are constantly on the lookout for our next exciting project and specialise in assisting inventors, entrepreneurs and larger companies take their concept all the way to production.

For more information on Open Bionics and the development of their products please visit www.openbionics.com