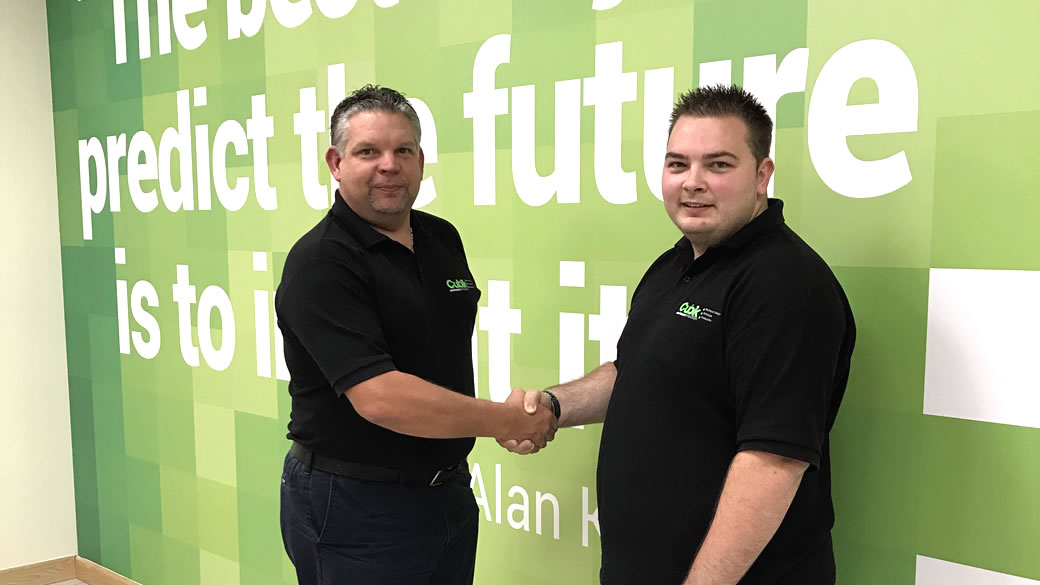 Cubik Innovation is delighted to announce that Sam Beard has been appointed as Operations Director. Sam will make the move from his current role as Operations Manager to co-direct the business alongside Managing Director, Paul Mullen. Having two directors in place is a first in Cubik history and the appointment signifies an important change in the company structure and securing the future of the business.

“Sam joining Cubik as Director is a huge upward step for Cubik. Taking on the responsibility of running a business is a difficult decision, but I know that Sam will take these responsibilities seriously. During his time at Cubik, he has excelled at everything he has done and more than proved his worth”.
–  Paul Mullen, Managing Director.

Sam has always been passionate about electronics from an early age. After finishing his A Levels, he went on to study for a degree in Computer Science at the University of the West of England (UWE). Keen to get some hands-on experience, he decided to take a year out from his studies and secured a position with engineering giant BAE Systems where he gained extensive knowledge in corporate systems and quality management systems.

After completing his degree, Sam went on to join Kinneir Dufort as a Test Engineer. During his time there, he assisted with the day to day running of the manufacturing cell and worked across a wide range of high-profile projects including the THALES Commander Unit for the Ministry of Defence (MOD).

In January 2013, Sam joined Cubik on a 3-month contract to help facilitate the move from a small room at the Bristol & Bath Science Park to one of the larger office spaces, and he never left.

Putting his manufacturing experience to good use, Sam soon set to work designing and building Cubik’s very first Production facility. As the only member of the newly established department, he spent his days building hundreds of Printed Circuit Boards (PCBs) single handed. Over next few years, Sam focussed on growing the department building a team of talented and multi-skilled engineers and two semi-automated production lines.

His experience in quality management led Sam to set up the ISO 9001-2015 Quality Management System, which Cubik has just been awarded for the 5th year in a row. As a result of Sam’s hard work, the ISO system has become an integral part of the business that provides reassurance to our customers that their products have been manufactured to the highest quality standards.

As the Production Department grew, Sam naturally took on more responsibility and progressed into the role of Production Manager overseeing the day to day running of the department.

In 2017, following rapid growth on the manufacturing side of the business, Sam was promoted to the role of Operations Manager. His responsibilities extended to the day to day management of the entire business and he became the reporting line to a strong team of 24 members of staff. Sam’s responsibilities include everything from setting business targets and overseeing the delivery of all projects, to making sure the kitchen is fully stocked with tea and coffee.

In fact, it’s a standing joke that his job description famously states the skills required are: “A vast knowledge of everything, everyone and the ability to manage a team whilst juggling a 3-page to do list, invoicing targets, meeting deadlines and remembering to the glue the handle back onto the kettle.”

“Over the past 6.5 years, I have seen the company grow and flourish and have enjoyed being a part of that at every stage. Becoming a Director at Cubik is a brand-new challenge that I can get stuck in to and I am looking forward to more of the same going forward”.
–  Sam Beard, Operations Director.

After 7 years as the sole director of Cubik, at the heart of Paul’s decision to appoint a new co-director are his staff:

“The most important thing to Sam and I is security for our staff. I always wanted someone within the business who can run it exactly as it is if, for any reason, I was not able to. Now, Cubik has two people who have an invested interest in the welfare of the team, the quality of our work and the growth of the business.

Sam and I are so aligned in how we see the business and the vision for the future, which makes decision making much easier. But I am also looking forward to having someone who will challenge me to think outside the box and provide a different perspective.”